How Do Private Investigators Prepare Evidence?

Private investigators perform a variety of tasks, namely investigatory responsibilities. For instance, they often assist in locating a person, such as a witness. They revisit the scene of a crime to collect further evidence. Or interview relevant parties to a case, and so on.

However, in tandem with collecting evidence, there is another very important responsibility. That is preparing evidence for presentation in court. Without this crucial step, it doesn’t matter how compelling a piece of evidence might be. If a private investigator doesn’t properly log said evidence, it becomes inadmissible.

There is a multitude of types of evidence that can be submitted in court. In this article, we will cover three of the most commonly used.

Physical evidence plays a very important role in most cases. That is to say, that preparing physical evidence for proper use in court is a crucial step for its validity. When collecting physical evidence a private investigator cannot allow it to become contaminated. They must handle it with care. They document everything in order to avoid such an outcome, such as the time, date, and place of collection. Documenting the conditions of said evidence is also crucial to its correct preparation and legitimacy.

Since the beginning of the digital age, digital evidence has become increasingly important and influential to the outcome of most cases. Hence why private investigators make so much use of audio and visual equipment when collecting evidence. Recording interviews, or engaging in surveillance, and so on. Cameras and microphones are the norm in this kind of work.

As with physical evidence, documenting and logging the conditions, date, time, and place of digital evidence is incredibly important. It must also be securely backed up and secured.

Witnesses play a massive role in many cases. Often times even being able to file charges in court is thanks to an eyewitness statement. Their contributions can be an important turning point in any case.

One of the most impactful forms witness statements can take is in combination with other forms of evidence. Since this can back up the claims and assertions in a witness interview. Their statements can also shine a light on the right direction for an investigation to take.

If you find yourself in need of a licensed private investigator and their particular set of skills, please feel free to call us. Or simply click on this link to get in contact with one of our team members. 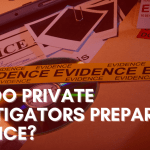 How Do Private Investigators Prepare Evidence?

3 Important Tasks a Private Investigator Can Help You With 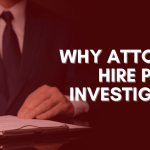 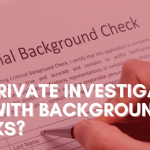 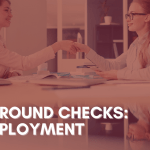 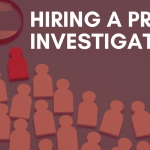 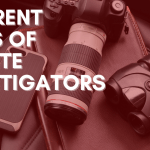